A Word to Spectator Parents 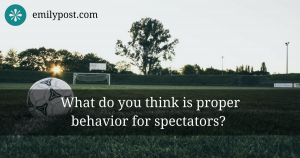 Poor sportsmanship on the part of some parents is hard to ignore and can make it seem as if all parents are guilty. It puts a damper on the game for the rest of the spectators, the kids, and the refs. Ask any kid over the age of six whom he learns his manners from and he'll say, "My parents."

As a parent, be the spectator you want your child to be.

Referees have a tough job. A baseball umpire, for example, makes around 150 calls each game. If he makes 3 that are questionable, he gets ripped apart by the fans, even though 3 out of 150 is a 98% success rate. Let's let them do their jobs.